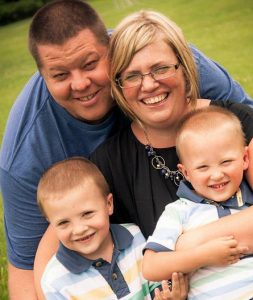 Ramsier’s Inc. is a family owned and operated business since 2007. The vision that started Ramsier’s developed early on in a teenage boy from Amherst, Ohio. Growing up in the “Sandstone Capital of the World,” Dan Ramsier got a job at the age of sixteen cutting grass for the Quarries. He would have never imagined that nine years later his weekend job would have this much influence on his adulthood. Over the years Dan worked his way up to an apprenticeship. He studiously mastered the art of stone cutting. During this time he married his wife Melinda and started his family.

Once his oldest son was born, Dan knew he wanted to leave a legacy for his children. Soon he formed his own stone cutting business that grew over the years. He started out with the name DPR Stone but soon changed it to Ramsier’s Inc. He wanted to ensure that his family name would be the front of the business so that his children would one day want to be a part of his vision.